There’s a special feeling of happiness one experiences after purchasing an adored item, and it’s magnified by 10 when you know proceeds from that purchase are going to a good cause. (No… I don’t have scientific evidence to back that statement up. I’m just going by my own heart.) It’s therapeutic. 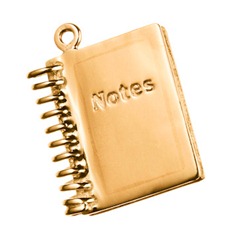 I’m hoping you’ve figured out by now that I fancy myself a writer (and a few other people agree… that’s why they write me checks). You may or may not, however, be privy to my love for notebooks. I almost always have one in my purse (even though I can take notes on my phone), and I have at least 5 in rotation at any given time.

I also dig jewelry, and I’m sentimental, so I swoon over small, meaningful danglies. See where I’m going with the recycled silver Notebook Charm that’s plated in gold and pictured to the left? Here’s the creamy center in all of this goodness, though: Altruette, the company behind it, will donate 50% of the its net proceeds to Girls Write Now. As a matter of fact, they make quite a few different pieces of jewelry, and they’re all tied to charities. This particular charm costs $155, but knowing that a sizeable chunk of that will go toward developing the next generation of writer chicks makes it worth it. Go check them out… whether you’re into animals, tech causes or global initiatives, there’s a piece of jewelry there for you.

During the LilScrybe days, I could recite most of Dr. Martin Luther King Jr.’s biography from memory (I also knew most of Harriet Tubman and Malcolm X’s stories, but today is about Dr. King). Even at that early age, I realized the importance of his sacrifices, risks and resistance to violence. I was barely into my big girl britches when his birthday became a holiday, and as such, I was raised during a time when the echo of the Civil Rights movement still rang out through the ‘hood, not just in rap rhetoric or twitter streams, but in the way families instilled values of education, appreciated our right to vote… (etc. etc.).

Now that the POTUS is a man of African Descent, and there are probably more wealthy and upper middle class Black Americans than there have ever been, many of us feel the dream has been realized. (I mean, look at all the Black folks we have on TV and in movies now, right?) However, There are many parts of Dr. King’s dream and of the Civil Rights movement that we’ve let slip. We enjoy the wealth, the comfort, and freedom but we seem to have lost a lot of the togetherness, collective work and willingness to sacrifice for the greater good. This weekend, my Facebook and twitter timelines were filled with quotes and of individual reflections of those quotes, and that’s awesome. Still, as we share quotes from Dr. King’s speeches, enjoy a day away from our offices I hope that we can all take a few moments to consider how we can revive our communities, re-energize our youth toward positivity and reshape some of the new and negative images of what it means to be an African American.

I’m not going to pretend I’ve been in the trenches or that I don’t enjoy luxuries. However, now, I’m asking… how can I help? How can we all help? And while you ponder that… remember these? 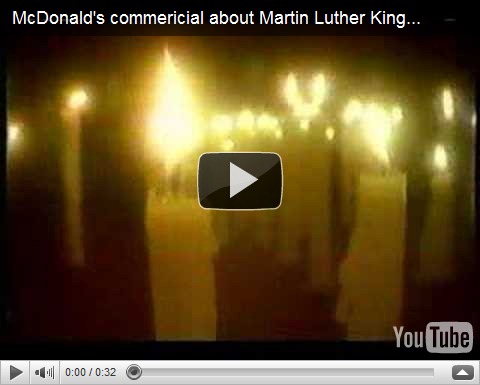 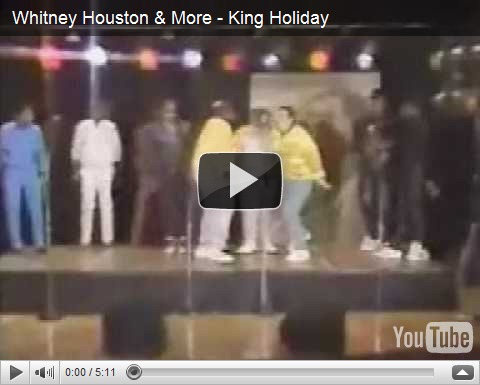 Technorati Tags: MLK,history,Civil Rights
Posted by Nafeesa at 4:15 AM No comments:

Email ThisBlogThis!Share to TwitterShare to FacebookShare to Pinterest
Labels: history, holdays, In Celebration of, music

The Oooh Weee: Screw the Zodiac Change, these Leo-inspired Pieces Have me Feenin’

We’re fabulous, generous, passionate and often creative. We’re also a bit dogmatic, a scoche bossy (I prefer “inclined to lead”) and allegedly interfering. Nonetheless, Leo women are easy to love (ask anyone who knows me).  A bunch of news reports, twitter chatter and Facebook updates are reporting that the planets have shifted over the last 3000 years, and many of us don’t really belong to the zodiac signs we thought we did. Well, to the folks who got us all up in a stir… I don’t believe you. You need more people. I’m pretty much the poster child for Leos, and your claims that I’m actually a Cancer won’t change that… because I said so. Anyway, here are a couple of Leoriffic pieces I’m contemplating to celebrate my sign. 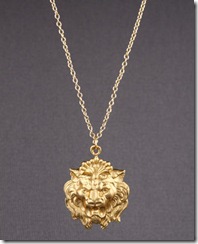 Gotta love a necklace that says “If you mess with me, I might bite your head off. “The Lioness Necklace” from Lulus.com does just that, except it’s still cute and dainty in a way. It’s only $17.99, too. See, not EVERYTHING has to be extravagant for a Leo to love it. (Especially if it’s some kind of self-acknowledging accessory.) 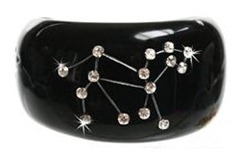 Leos are also fans of sparkly-yet-not-obnoxious things (OK most of us like sparkly things in general, but we know how to rock them properly). That must be why I’m such a fan of this Leo Zodiac Cuff by Jessica Kagan Cushman (via Vivre.com for $85)

The moment I saw these dangly “I Ain’t Lion” earrings, I was in love. Lions? Check! Odd detail? Check! Dope with a fro? CHECK! In stock? Nope. Still, I had to share them… maybe they’ll be back at ModCloth soon. (Gotta love a restock notification list. *blink*)

Know of other leotastic accessories I should be eyeballing? Let me know!

Technorati Tags: fashion,jewelry,accessories,Zodiac change,Leo
Posted by Nafeesa at 9:23 AM No comments:

The Oooh Weee: This Urban Outfitters Gangsta Rap Tee has me Feenin’

Because the “Debil” Was Busy… 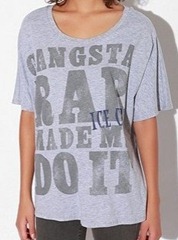 So… I try to stay on Karma’s good side and keep my inner ratchet-ness at bay. However, occasionally, I act up a little. Previously, I’d say “Blame it on the al-al-al-al…” or “When the Remy’s in the system…” However, Thanks to Urban Outfitters I have an even better cop out: Gangsta Rap! Blamed for various social ills from disregard for the law to middle American white teen angst, gangsta rap might be the best scapegoat ever. And now I’m jumping on the bandwagon (granted… I do have my opinions about the effects of entertainment on society, but that’s for a different conversation). So, if you happen to see me cuss someone out, kiss a guy in public or even don a pair of fifty-four-elevens, remember… Gangsta Rap Made Me DO IT. I promise to only say it when I’m wearing the tee shirt, though.

Technorati Tags: fashion,style,urban outfitters,tee shirts
Posted by Nafeesa at 2:48 AM No comments:

The Oooh Wee: Zara’s Sweater Coat Has Me Feenin

Caught by the Collar 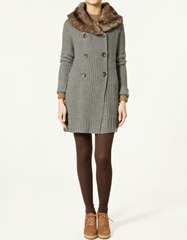 Earlier in the season I wished for a really cute sweater with a big furry collar (don’t worry, it’s faux. I don’t want no prah-lems prah-lems with PETA… at least not over a sweater). I saw a few in various stores, but they didn’t have the cozy-but-fly look I had in mind. I must have wished upon the right star, because thanks to Slice of Style, I just realized that Zara has the EXACT sweater I want. (Wondering where that particular wish-granting star was last night when the Mega Millions drawing occurred.) The double breast and shawl collar give it that fresh from granny’s closet look I’m loving at the moment. Plus it’s only $60. I wish Zara would hurry up and get their e-commerce game tight so I could just order it online. I can’t wait to get it (and I’m praying I’ll be able to find it in stores… especially now that I’m sharing it before buying it). I’ve already got various looks floating in my head. Think leggings, boots and a belt or slim jeans and casual shoes, or… you know what… just wait and see.

Note to Self: You Kick Ass 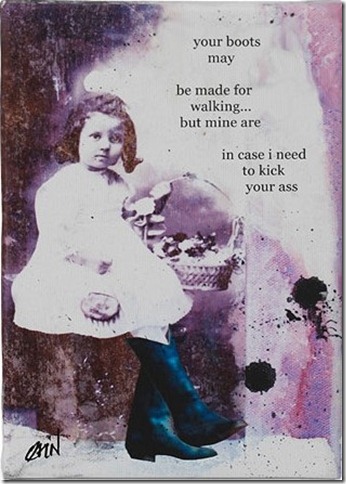 Indie life can be so tough. People pay you late (playing with my money is like playing with my emotions), nickel and dime you and generally look for various ways to SON a ninja. I’m a fairly nice and accommodating person, but as my business grows (PR consulting, copywriting & content, in case you forgot), I’ve learned to diplomatically and verbally put the smack down when necessary. I know what my talents and services are worth, and I politely demand that people act accordingly. (#Rockstarmindset) I think this poster by Erin Smith pretty much sums it up…

Wondering where “Bad boots on..” is from (sounds so familiar, but unless you’re a Beyonce STAN, you prob can’t quite remember why…) Here's the source: 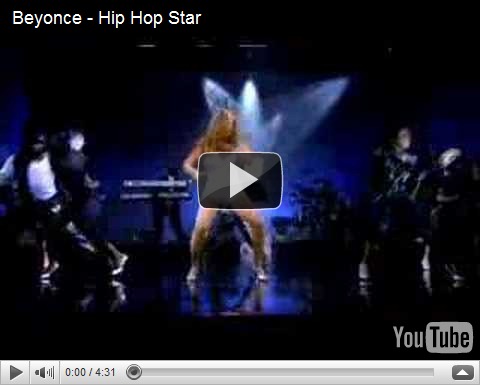