I Wanna Take a Minute or Two to Give Much Respect Due... 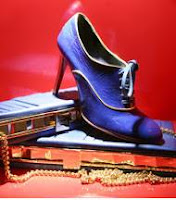 You know how sometimes you read this blog and ask, "Why can't I write like that?" (Just nod and smile... make a sista feel good.) Well, I had that exact thought today while reading Cintra Wilson's "Open -Toed Fetishes" in the Critical Shopper section of the New York Times. In it, she describes a recent trek to the Louboutin outbost on Manhattan's upper east side. (She pretty much had me at "Fetish") What got me, though, was the way she described said shoe 'sperience so hilariously that i could have sworn it was an episode of some sitcom. One of my favorite parts was her telling of a fellow shopper's shoe triumph:

"Suddenly, a miracle: Lil’ Tesla, whose stature could best be described as compact and sturdy, had successfully donned a variation on the unattainable Nude. Shazam! Her legs looked instantly toned, tanned, considerably longer and gleaming as if illuminated by flashbulbs.

I suddenly understood why everyone in the shop was so miserable. I was blind; now I seethed."

If you get a chance, check it out. If the words don't get to you, the photos of Christian's shoe confections will. Plus... it's always cool when you can start a sentence with, "I was reading the Times yesterday, and..."